Be Prepared! How to Nail Pre-Production When You're Making Videos.

A blog by Jeff Woodward, Director of Client Productions

Be prepared. So say the Boy Scouts, but what does that mean in terms of production? Well, if you ask ANY filmmaker they’ll tell you that there is no such thing as too much pre-production and what they mean, is that there is simply no such thing as being too prepared. Now, no amount of preparation is going to eliminate every mistake and no amount of preparation will account for everything that can go wrong on a shoot, but wow will it ever help you overcome the stuff that will (not can) go wrong. Let’s talk about a few ways you can prepare for your next shoot and look like a winner in front of your clients.

1. Define who the audience is for the video.
I can’t tell you how often I’ve asked a client who the intended audience for a video is, only to have them respond, “Well, everyone”. This is laudable, but not at all practical. If your client hasn’t thought about who they’re trying to reach with video then you need to help them. Often a good exercise is to ask them to imagine a single person they’re trying to reach and assign demographic info and personality traits to that hypothetical audience member.

Why is this important? Well, specificity is key in making a powerful and dramatic video. Getting your client to really think about who they’re trying to reach will help you make choices about scripting, casting, style and tone, and save you days, or even weeks in the revision cycle.

2. Write, rewrite, then rewrite some more
How many drafts of a script is too many? I don’t know but it’s not a number I’ve ever hit. The truth is that you’ll run up against deadlines before you have a perfect script. Rewriting your script lets you get past the obvious ideas, it lets you weed out boring language and cliches. It forces you to constantly ask if you’re getting the point across effectively and eloquently. When you write your script and revise it, give yourself constraints as they will help you. How long is your video? That will affect the length and tone of the script. Who’s it for? Is it a marketing video, or a teaching video, or something else?

Why is this important? If you ever see an interview with an Oscar winning director or actor about an award winning project, they will inevitably talk about the brilliance of the script. The same holds true for a project of any length or style. Your script is the blueprint for your entire video and the more time and thought you put into it, the more smoothly the rest of your production will go.

3. Lists are your friend
It doesn’t matter whether you’re shooting a feature film or a thirty second video, you need to prepare yourself so that when things inevitably go wrong, you’ll be as prepared as you can be. Also, unless you’re helming the next Star Wars film, you’re probably working alone or as part of a small team. Pre-production lists that cover things like locations, props, shots, personnel, scheduling, equipment....you get the picture. There’s a lot to think about when producing a video so the more you’re keeping track of things, the less can go wrong. Hopefully.

Below is a shotlist for a short film the author directed: 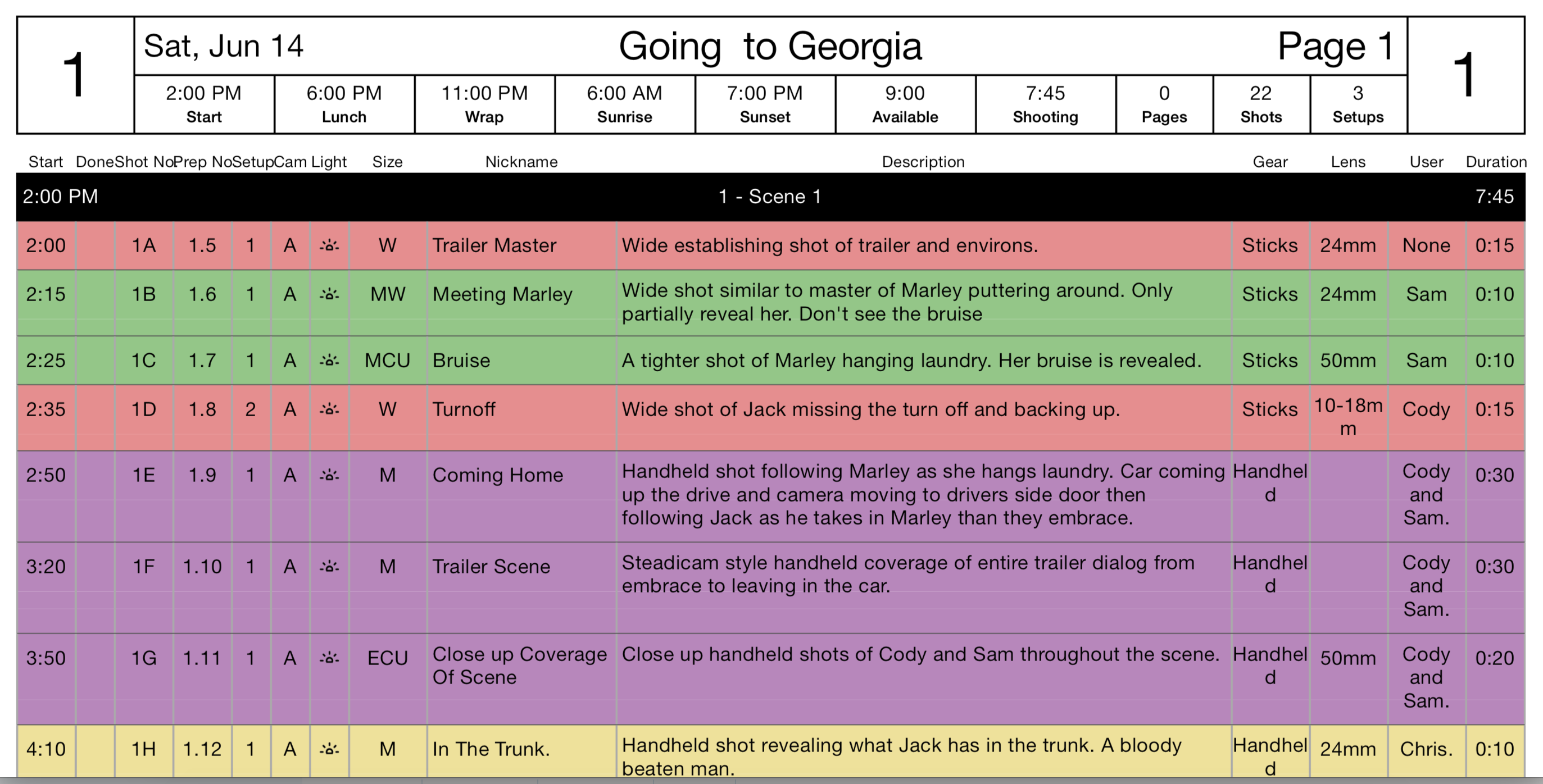 Why is this important? Well, at the risk of being repetitive, this is all about being prepared. The other thing is that going over list after list makes you constantly think and rethink about what you’re trying to convey and how you’re trying to convey it. Believe it or not, thinking about seemingly unrelated things like where and when you’re going to film a video helps you make decisions about tone, scripting and messaging. Everything is connected.

Here’s a link to a great resource for forms and documents that you might use in pre-production.
https://blog.filestage.io/free-templates-filmmakers-part-1-pre-production/

4. Do a production schedule
Plan out all stages of your production. How many days will you need for filming? For editing? For revisions? Does your video have a ton of special effects? Are you doing an interview with a subject who’s very busy? How strict are your delivery deadlines? Does your client need to show the draft videos to several people before giving you notes for revision? All of these things will influence your production schedule. There are a few ways to do this: from literally scribbling entries on a calendar to something elegant and visual like a Gantt chart.

Why is this important? Creating and sharing a production schedule with your client will help everyone involved with the production of the video see what goes into all the various stages and helps ensure that there are never any surprises around deadlines. I know from personal experience how important that is.

5. Check and test your equipment
On big film productions, there are literally entire crews of technicians who are there to ensure equipment is in working order and fix something if it breaks. There are professionals with incredible degrees of specialization and training to handle the very complex equipment. Your reality though, is probably that you’re writing and directing, as well as possibly operating the camera or helping with sound and lighting. You’re almost certainly going to be helping to set everything up and tear it down. Now if you’re anything like me, you know enough about gear to make decisions and get by, but you’re not a technician. This is why I can’t emphasize these next points enough. Check your equipment before filming. Make sure the lights all turn on like they’re supposed to. Check that the batteries are charged and that you’ve got disks, or tape or film (or whatever media you’re recording on), make sure your lenses are clean. Never, ever, let the first time you’re using a new piece of equipment be on the shoot you’re filming. This might seem obvious, but I’ve seen experienced camera operators flummoxed by a new tripod head or gimbal or slider and it’s completely derailed the shoot. It doesn’t matter if you’re up against a very tight deadline, make the time to make sure the equipment works.

Why is this important? There are so many things that can go wrong on a video shoot that you won’t have control over that you really owe it to yourself, to your crew, and to your client to make sure the stuff you can control doesn’t go wrong.

6. Scout things out
By scouting things out, I’m not referring in this case to some ephemeral Boy Scouts analogy. I’m saying that you should absolutely visit the locations that you’re going to film, if possible at the same time that you plan to be filming your video. If you can bring your camera person and sound person along with you as well, that's ideal, but at the very least you should go. This isn’t just a social visit either, here are some specific things you should look for: How’s the light? Are you filming outdoors or near windows? The sun is going to move during the day, if you’re shooting for several hours your lighting will change as the sun moves. What are some of the sound issues? Are you near traffic? Is it a busy office? Are you filming in an industrial setting or kitchen? Post audio editing can perform almost miracles these days, but the more problems you can solve before filming, the easier everyone’s life will be. You probably don’t want to conduct that interview with a chef next to a fridge that’s going to keep turning on and off. Traffic noise is probably okay if the viewers can see cars passing by in the visuals but it’ll be very confusing if they can’t.

Why is this important? The more technical issues you can spot and consider prior to filming, the less likely you are to be delayed or tripped up by those issues when the cameras are rolling, or worse, when the footage is in the edit suite.

7. Take lots of pictures.
This is one that I’ve learned for myself over the years. I am a note taker but I’m also a very social person so if I’m engaging with my client, or an actor or a presenter, I can often get caught up in the moment or on some tangent that I find interesting. I’ll lose the thread on a location, technical matter or style choice that will haunt me when the cameras roll. So now, I always have a camera with me when I visit locations, have design conversations or do pre-interviews with clients or interview subjects. This lets me create a visual reference guide for myself when I’m thinking about things like lighting, lens selection, camera positions and angles, colour schemes, and any number of other decisions that I make in the course of a production.

Why is this important? Keeping records is important. Lists are key and documentation is useful but often video production is fluid and frenetic. Since virtually all of us carry a camera in our pockets, snapping a photo is an incredibly efficient way to record and keep the pre-production process even if you’ve only got your phone camera to do it.

There are far more tips and steps that you’ll learn as you do more productions, and you'll make your own mistakes along the way. However, if you keep these seven pre-production steps in mind, you will find that your shoots go more smoothly, that you’ll have fewer issues in post production, and that you’ll have happier clients. Now get out there and shoot, but only after you’re prepared. The Boy Scouts were right! 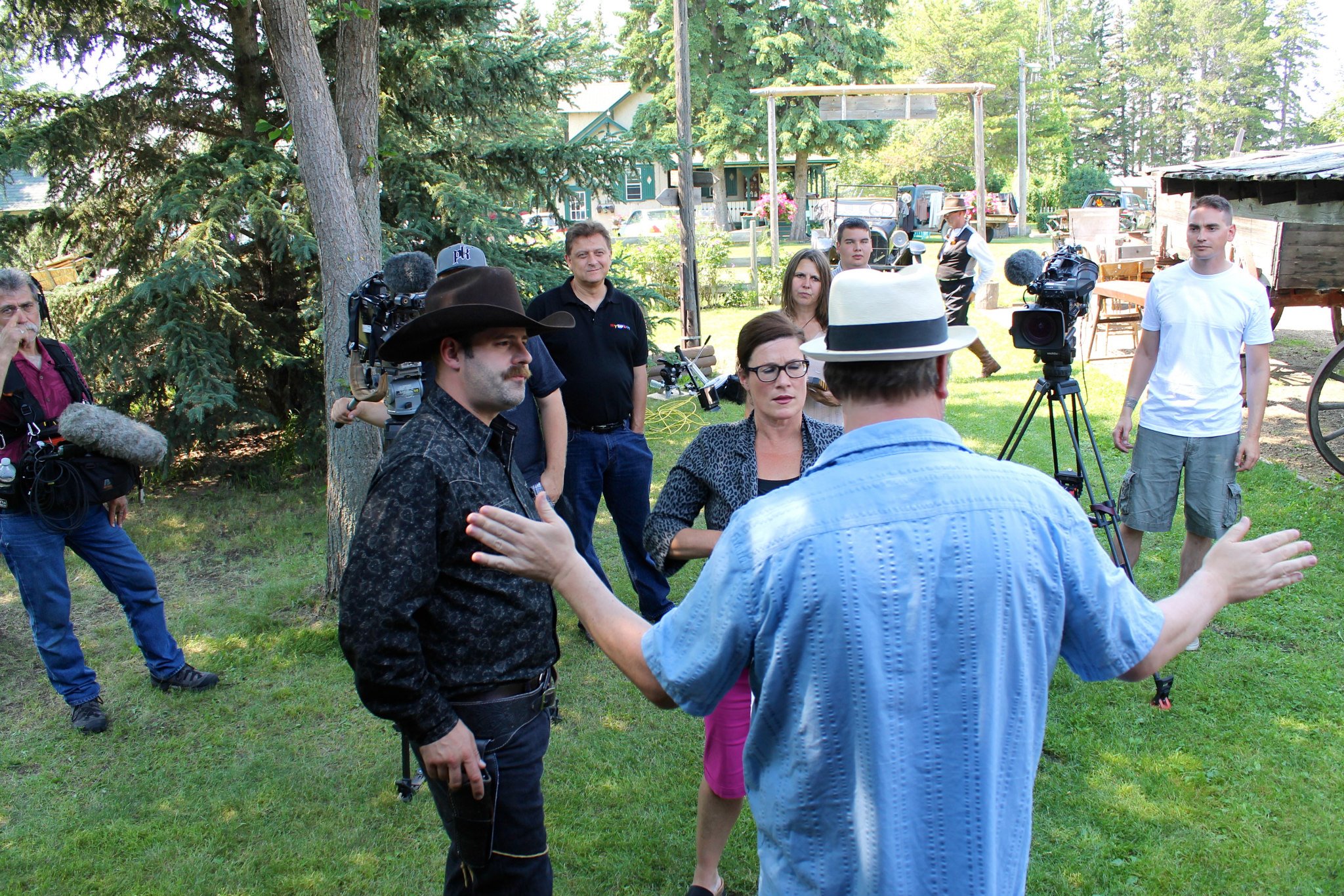 In today's video blog, we introduce to you our Director of Client Productions, Jeff Woodward. Jeff brings a wealth of knowledge from the TV...

The Making of Graphic Design Fundamentals

Graphic Design Fundamentals (GDF) is our design team’s answer to that question. First envisioned in 2014, GDF reveals the components of great graphic design for those who haven’t taken a four year degree in Visual Communication Design (VCD)....